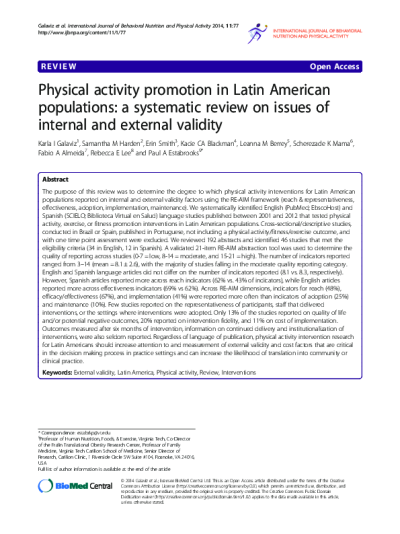 The purpose of this review was to determine the degree to which physical activity interventions for Latin American populations reported on internal and external validity factors using the RE-AIM framework (reach & representativeness, effectiveness, adoption, implementation, maintenance). We systematically identified English (PubMed; EbscoHost) and Spanish (SCIELO; Biblioteca Virtual en Salud) language studies published between 2001 and 2012 that tested physical activity, exercise, or fitness promotion interventions in Latin American populations. Cross-sectional/descriptive studies, conducted in Brazil or Spain, published in Portuguese, not including a physical activity/fitness/exercise outcome, and with one time point assessment were excluded. We reviewed 192 abstracts and identified 46 studies that met the eligibility criteria (34 in English, 12 in Spanish). A validated 21-item RE-AIM abstraction tool was used to determine the quality of reporting across studies (0-7 = low, 8-14 = moderate, and 15-21 = high). The number of indicators reported ranged from 3–14 (mean = 8.1 ± 2.6), with the majority of studies falling in the moderate quality reporting category. English and Spanish language articles did not differ on the number of indicators reported (8.1 vs. 8.3, respectively). However, Spanish articles reported more across reach indicators (62% vs. 43% of indicators), while English articles reported more across effectiveness indicators (69% vs 62%). Across RE-AIM dimensions, indicators for reach (48%), efficacy/effectiveness (67%), and implementation (41%) were reported more often than indicators of adoption (25%) and maintenance (10%). Few studies reported on the representativeness of participants, staff that delivered interventions, or the settings where interventions were adopted. Only 13% of the studies reported on quality of life and/or potential negative outcomes, 20% reported on intervention fidelity, and 11% on cost of implementation. Outcomes measured after six months of intervention, information on continued delivery and institutionalization of interventions, were also seldom reported. Regardless of language of publication, physical activity intervention research for Latin Americans should increase attention to and measurement of external validity and cost factors that are critical in the decision making process in practice settings and can increase the likelihood of translation into community or clinical practice.