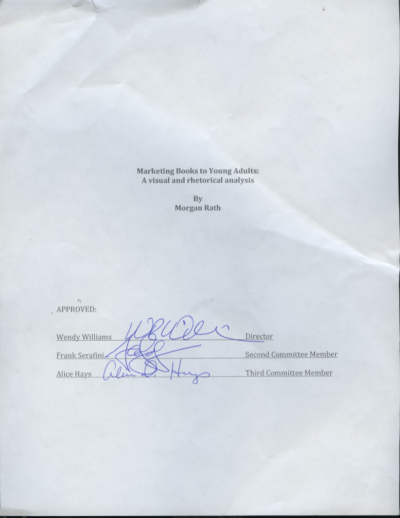 Marketing Books to Young Adults: A visual and rhetorical analysis

Over the last several decades, young adult literature has been growing in popularity. In 1997 there were a total of 3,000 young adult books published. In 2009 that number jumped…

Over the last several decades, young adult literature has been growing in popularity. In 1997 there were a total of 3,000 young adult books published. In 2009 that number jumped to 30,000 with sales exceeding $3 billion (Brown The Atlantic). Today, Generation Z is the target young adult genre audience. Members of Generation Z are ages 12 to 17, or people born between about 1995 and 2009. This generation is accustomed to and grew up with ready access to technology. In order to garner the attention of this generation, marketers have to be more creative and focus on storytelling in their digital marketing methods. In a field saturated with titles, what methods do publishers use to distinguish their titles from others? In this thesis project I examined what visual and rhetorical elements marketers are using to draw in the young adult crowd. Visually, I utilized the criteria outlined by Dr. Frank Serafini in his book Reading the Visual. Rhetorically, I utilized the concepts of logos, ethos, pathos, and kairos. I conducted a visual and rhetorical analysis of the marketing methods implemented by young adult publishers on their young adult web platform, Twitter, Facebook, Goodreads, and on the physical book. I selected 5 novels based on webpage placement, i.e. which novels were placed furthest up the webpage, to the left, and the largest. The webpages I examined were the ones used by the Big Five publishing houses, Penguin Random House, Simon & Schuster, Hachette, Macmillan, and HarperCollins, to push out their young adult titles. Based on placement my novels were Morrighan: A Remnant Chronicles Novella by Mary E. Pearson, Other Broken Things by C. Desir, A Gatlin Wedding by Kami Garcia and Margaret Stohl, Anna and the Swallow Man by Gavriel Savit, and Glass Sword by Victoria Aveyard. This study found that pathos, or emotionally charged language, is the most utilized rhetorical technique. A lot of the time these emotional appeals centered on nostalgia, as 4 out of my 5 novels were part of a series. In addition there was a lot of language evoking feelings of female empowerment. Visually, all of the covers featured objects instead of people. This way, larger portions of the target audience can associate with the main character and envision themselves in that role. Finally, 2 out of the 5 books were novellas, which are companions to a series and available exclusively electronically. This shows that marketers are in some cases choosing to push out cheaper, novellas. Future studies could look at which marketing technique, since each platform varied in its medium focus, yielded the most sales. This would help marketers tailor their future efforts to Generation Z. For example, what yields more sales focusing on Twitter or Facebook? In addition, studies should look at why there is such a push for female empowerment. Since male members of Generation Z are not the target market on the publisher's website, Twitter, Facebook, Goodreads, and physical book, where are they being targeted? It is important to figure out how teenage boys select their books, as well.