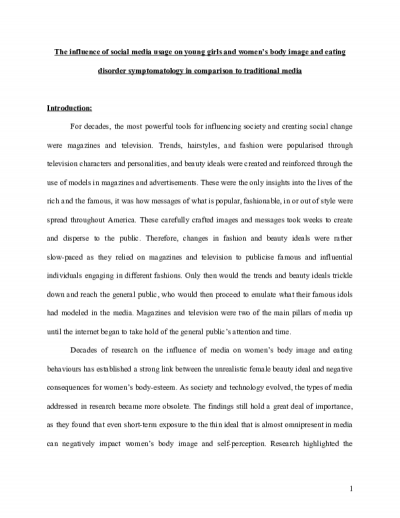 This paper focused on the effects of social media on young girls’ and women’s body image and eating disorder symptomatology in comparison to traditional media. A review of the literature…

This paper focused on the effects of social media on young girls’ and women’s body image and eating disorder symptomatology in comparison to traditional media. A review of the literature on the influence of media on women’s body image and eating disorder symptomatology was conducted and used in conjunction with research specific to the impact of social media in order to best assess how much power social media has on young women’s body image. Although much of the research on traditional media can be extrapolated to social media, the sense of intimacy and the strong bidirectional influence specific to social media arguably amplify the negative effects of traditional media. In addition to analysing past research, the different demographics and effects exerted by different social media platforms - Instagram, Facebook, and Twitter, specifically - were assessed and addressed. Due to Instagram’s younger user base and its emphasis on appearance, much focus was placed on Instagram’s influence. This paper found that social media targets vulnerable populations and can increase the likelihood of body image disturbances and disordered eating. Further research must be conducted in order to address the current gaps in the field and to create a deeper and more comprehensive understanding of how social media interacts with eating disorder symptomatology across various demographics. 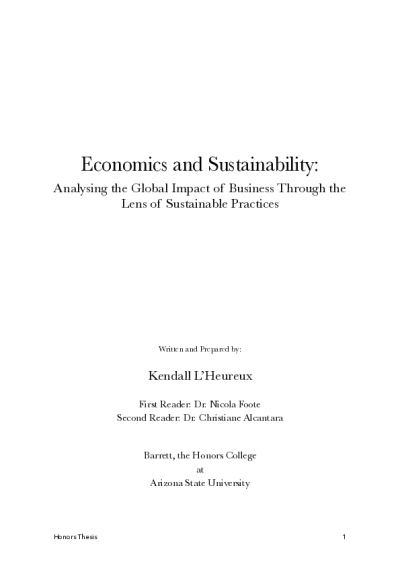 Economics and Sustainability: Analysing the Global Impact of Business Through the Lens of Sustainable Practices

This thesis details the impact of sustainable practices, or lack thereof, among IKEA and Chanel. It takes these principles and analyzes the effectiveness of them and works to implement them across industries and companies of different sizes and organizational structures.