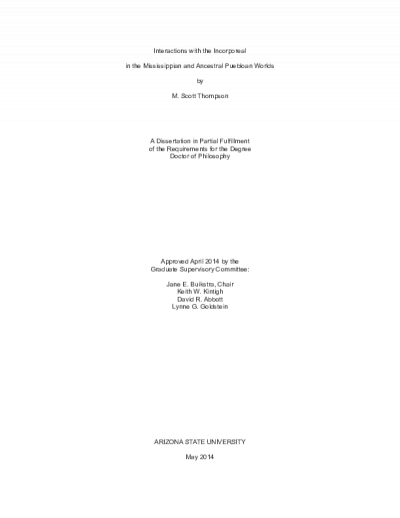 Interactions with the incorporeal in the Mississippian and ancestral Puebloan worlds

This research explores how people's relationships with the spirits of the dead are embedded in political histories. It addresses the ways in which certain spirits were integral "inhabitants" of two…

This research explores how people's relationships with the spirits of the dead are embedded in political histories. It addresses the ways in which certain spirits were integral "inhabitants" of two social environments with disparate political traditions. Using the prehistoric mortuary record, I investigate the spirits and their involvement in socio-political affairs in the Prehispanic American Southeast and Southwest. Foremost, I construct a framework to characterize particular social identities for the spirits. Ancestors are select, potent beings who are capable of wielding considerable agency. Ancestral spirits are generic beings who are infrequently active among the living and who can exercise agency only in specific contexts. Anonymous groups of spirits are collectives who exercise little to no agency. I then examine the performance of mortuary ritual to recognize these social identities in the archaeological record. Multivariate analyses evaluate how particular ritual actions memorialized the dead. They concentrate on treatment of the body, construction of burial features, inclusion of material accompaniments, and the spaces of ritual action. Each analysis characterizes the social memories that ritual acts shaped for the spirits. When possible, I supplement analysis of archaeological data with ethnohistoric and ethnographic information. Finally, I compile the memories to describe the social identities for the spirits of the dead. In this study, I examine the identities surrounding the spirits in both a Mississippian period settlement on the Georgia coast and in several Protohistoric era Zuni towns in the northern Southwest. Results indicate that ancestors were powerful members of political factions in coastal Mississippian communities. In contrast, ancestral spirits and collectives of long-dead were custodians of group histories in Zuni communities. I contend that these different spirits were rooted in political traditions of competition. Mississippian ancestors were influential agents on cultural landscapes filled with contestation over social power. Puebloan ancestral spirits were keepers of histories on landscapes where power relations were masked, and where new kinds of communities were coalescing. This study demonstrates that the spirits of the dead are important to anthropological understandings of socio-political trajectories. The spirits are at the heart of the ways in which history influences and determines politics.

Temporary territories and persistent places: a bioarchaeological evaluation of the association between monumentality and territoriality for foraging societies of the prehistoric Ohio Valley

Federal legislation prioritizes the repatriation of culturally unidentifiable human remains to federally-recognized Indian tribes that are linked geographically to the region from which the remains were removed. Such linkages are…

Federal legislation prioritizes the repatriation of culturally unidentifiable human remains to federally-recognized Indian tribes that are linked geographically to the region from which the remains were removed. Such linkages are typically based on a Eurocentric notion of the exclusive use and occupancy of an area of land - a space-based approach to land use. Contemporary collaborations between anthropologists and indigenous communities suggest, however, that indigenous patterns of land use are better characterized as place-based and are therefore more complex and fluid than is reflected in current legislation. Despite these insights, space-based approaches remain common within archaeology. One example is the inference of territorial behavior from the presence of monuments within the archaeological record.

Drawing on osteological and mortuary data derived from a sample of Adena mounds located in northern Kentucky, this dissertation adopts a place-based approach in order to evaluate the archaeological association between monumentality and territoriality. The relative amounts of skeletal and phenotypic variability present at various spatial scales are quantified and compared and the degree to which mortuary and phenotypic data exhibit spatial structure consistent with the expectations of an isolation-by-distance model is assessed.

Results indicate that, while burial samples derived from some mounds exhibit amounts of phenotypic variability that are consistent with the expectations of a territorial model, data from other mounds suggest that multiple groups participated in their construction. Further, the general absence of spatial structure within the phenotypic data suggests that the individuals interred in these mounds are perhaps better characterized as representing an integrated regional population rather than localized groups. Untested archaeological inferences of territoriality may therefore mischaracterize regional population dynamics. In addition, these results suggest that the prioritization criteria for the repatriation of culturally unidentifiable human remains may merit revision.