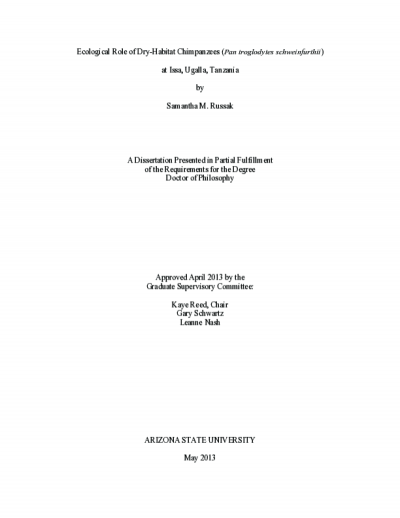 Identifying the ecological role, or niche, that a species occupies within their larger community elucidates environmental adaptability and evolutionary success. This dissertation investigates the occupied niche of chimpanzees (Pan troglodytes…

Identifying the ecological role, or niche, that a species occupies within their larger community elucidates environmental adaptability and evolutionary success. This dissertation investigates the occupied niche of chimpanzees (Pan troglodytes schweinfurthii) living in an open, dry savanna-woodland environment by examining patterns of resource use and interspecific interactions. Data were collected October 2010--November 2011 at Issa, in the Ugalla region of western Tanzania, which is one of the driest, most open, and seasonal habitats inhabited by chimpanzees. Unlike most primatological studies which employ methods that include focal follows, this study focused instead on observing 'resource patches' for chimpanzees. Patch focals allow for the observation of all animals within a study area; capture resources that are not used by the study species; and are particularly well suited for unhabituated communities. In order to better understand relationships between environment and behavior, data collected at Issa are compared with published data from other chimpanzee populations. Issa chimpanzees were expected to have broader resource use than forest chimpanzees, as well as increased competition with other fauna, due to fewer available resources. However, in contrast to the assumption of food scarcity in dry habitats, dietary resources were available throughout the year. Like other populations, the diet of Issa chimpanzees consisted of mostly fruit, but unlike at other sites, the majority of plants consumed were woodland species. Additionally, although chimpanzees and other fauna shared spatial and dietary resources, there was only nominal overlap. These results point to extremely low levels of indirect competition between chimpanzees and other fauna. Despite extensive study of forest chimpanzees, little is known about their role within their faunal community in open, dry habitats, nor about how greater seasonality affects resource use. This project addresses both of these important issues and fosters novel approaches in anthropological studies, especially in reference to chimpanzee ecology and evolution. Understanding current chimpanzee behavioral relationships with their environments shapes hypotheses about their pasts, and also informs predictions about behaviors of similar taxa in paleo-environments. Lastly, examining the ecological role of chimpanzees within their larger communities will influence the formation of, as well as evaluate, conservation strategies.