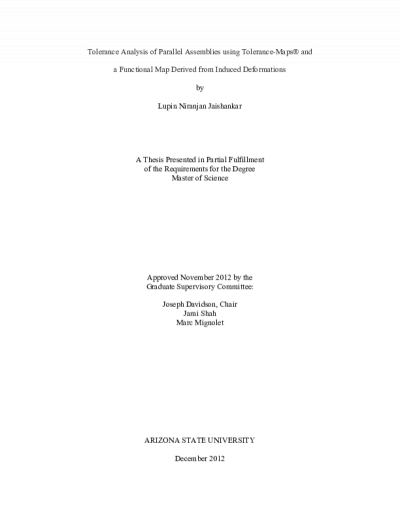 This thesis concerns the role of geometric imperfections on assemblies in which the location of a target part is dependent on supports at two features. In some applications, such as…

This thesis concerns the role of geometric imperfections on assemblies in which the location of a target part is dependent on supports at two features. In some applications, such as a turbo-machine rotor that is supported by a series of parts at each bearing, it is the interference or clearance at a functional target feature, such as at the blades that must be controlled. The first part of this thesis relates the limits of location for the target part to geometric imperfections of other parts when stacked-up in parallel paths. In this section parts are considered to be rigid (non-deformable). By understanding how much of variation from the supporting parts contribute to variations of the target feature, a designer can better utilize the tolerance budget when assigning values to individual tolerances. In this work, the T-Map®, a spatial math model is used to model the tolerance accumulation in parallel assemblies. In other applications where parts are flexible, deformations are induced when parts in parallel are clamped together during assembly. Presuming that perfectly manufactured parts have been designed to fit perfectly together and produce zero deformations, the clamping-induced deformations result entirely from the imperfect geometry that is produced during manufacture. The magnitudes and types of these deformations are a function of part dimensions and material stiffnesses, and they are limited by design tolerances that control manufacturing variations. These manufacturing variations, if uncontrolled, may produce high enough stresses when the parts are assembled that premature failure can occur before the design life. The last part of the thesis relates the limits on the largest von Mises stress in one part to functional tolerance limits that must be set at the beginning of a tolerance analysis of parts in such an assembly.