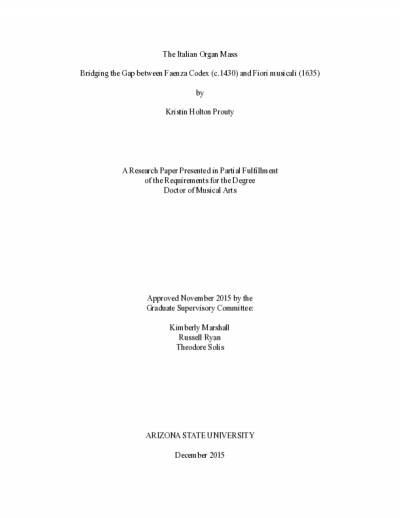 This paper provides a comprehensive study of Italian liturgical organ works from the 15th to 17th centuries. This music was composed for the Catholic Mass, and it demonstrates the development…

This paper provides a comprehensive study of Italian liturgical organ works from the 15th to 17th centuries. This music was composed for the Catholic Mass, and it demonstrates the development of Italian keyboard style and the incorporation of new genres into the organ Mass, such as a Toccata before the Mass, music for the Offertory, and the Elevation Toccata. This often neglected corpus of music deserves greater scholarly attention.

The Italian organ Mass begins with the Faenza Codex of c.1430, which contains the earliest surviving liturgical music for organ. Over a century would pass before Girolamo Cavazzoni published his three organ Masses in 1543: Mass IV (for feasts of apostles), Mass IX (for Marian feasts) and Mass XI (for typical Sundays of the year). The prevalence of publishing in Venice and the flourishing liturgical culture at San Marco led two notable organists, Andrea Gabrieli and Claudio Merulo, to publish their own Masses in 1563 and 1568. Both composers cultivated imitation and figurative lines which were often replete with ornamentation.

Frescobaldi’s Fiori musicali, published in Venice in 1635, represents the pinnacle of the Italian organ Mass. Reflecting the type of music he performed liturgically at San Pietro in Rome, this publication includes several new genres: canzonas after the reading of the Epistle and after Communion; ricercars after the Credo; and toccatas to be played during the Elevation of the Host. Frescobaldi’s music shows unparalleled mastery of counterpoint and invention of figuration. His liturgical music casts a long shadow over the three composers who published organ Masses in the decade following Fiori musicali: Giovanni Salvatore, Fra Antonio Croci and Giovanni Battista Fasolo.

This comprehensive look at Italian organ Masses from the 15th-17th centuries reveals the musical creativity inspired by the Catholic liturgy. Perhaps because of their practical use, these organ works are often neglected, mentioned merely as addenda to the other accomplishments of these composers. Hopefully insight into the contents of each organ Mass, along with the information about their style and aspects of performance practice, will make these musical gems more accessible to contemporary organists.