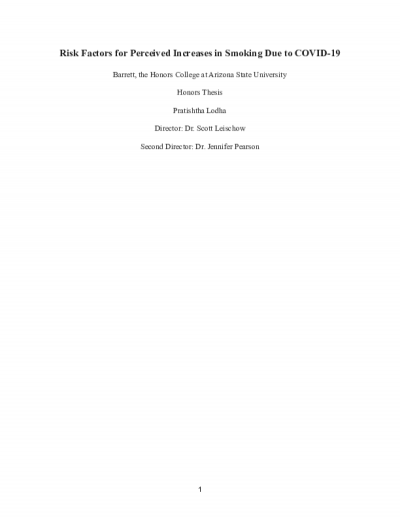 Risk Factors for Perceived Increases in Smoking Due to COVID-19

Due to the COVID-19 pandemic, declared in March of 2020, there have been many lifestyle changes which have likely influenced tobacco smoking behavior. Such lifestyle changes include lockdowns, stay at home orders, reduction in social cues related to smoking, increased stress, and boredom among other things. This study utilized a cross-sectional survey which looked into these behaviors, primarily perceived risk to COVID-19, and determined if there is an association between perceived risk and education level/race. Education level is a proxy for income and material resources, therefore making it more likely that people with lower levels of education have fewer resources and higher perceived risk to negative effects of COVID-19. Additionally, people of color are often marginalized in the medical community along with being the target of heavy advertising by tobacco companies which have likely impacted risk to COVID-19 as well. 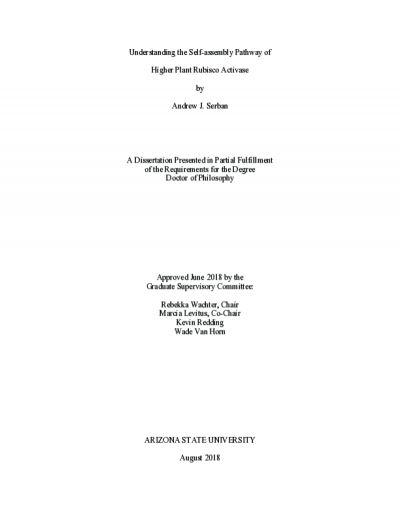 Rubisco activase (Rca) from higher plants is a stromal ATPase essential for reactivating Rubiscos rendered catalytically inactive by endogenous inhibitors. Rca’s functional state is thought to consist of ring-like hexameric assemblies, similar to other members of the AAA+ protein superfamily. However, unlike other members, it does not form obligate hexamers and is quite polydisperse in solution, making elucidation of its self-association pathway challenging. This polydispersity also makes interpretation of traditional biochemical approaches difficult, prompting use of a fluorescence-based technique (Fluorescence Correlation Spectroscopy) to investigate the relationship between quaternary structure and function. Like cotton β Rca, tobacco β Rca appears to assemble in a step-wise and nucleotide-dependent manner. Incubation in varying nucleotides appears to alter the equilibrium between varying oligomers, either promoting or minimizing the formation of larger oligomers. High concentrations of ADP seem to favor continuous assembly towards larger oligomers, while assembly in the presence of ATP-yS (an ATP analog) appears to halt continuous assembly in favor of hexameric species. In contrast, assembly in the “Active ATP Turnover” condition (a mixture of ATP and ADP) appears to favor an almost equal distribution of tetramer and hexamer, which when compared with ATPase activity, shows great alignment with maximum activity in the low µM range. Despite this alignment, the decrease in ATPase activity does not follow any particular oligomer, but rather decreases with increasing aggregation, suggesting that assembly dynamics may regulate ATPase activity, rather than the formation/disappearance of one specific oligomer. Work presented here also indicates that all oligomers larger than hexamers are catalytically inactive, thus providing support for the idea that they may serve as a storage mechanism to minimize wasteful hydrolysis. These findings are also supported by assembly work carried out on an Assembly Mutant (R294V), known for favoring formation of closed-ring hexamers. Similar assembly studies were carried out on spinach Rca, however, due to its aggregation propensity, FCS results were more difficult to interpret. Based on these findings, one could argue that assembly dynamics are essential for Rca function, both in ATPase and in regulation of Rubisco carboxylation activity, thus providing a rational for Rca’s high degree of polydispersity.