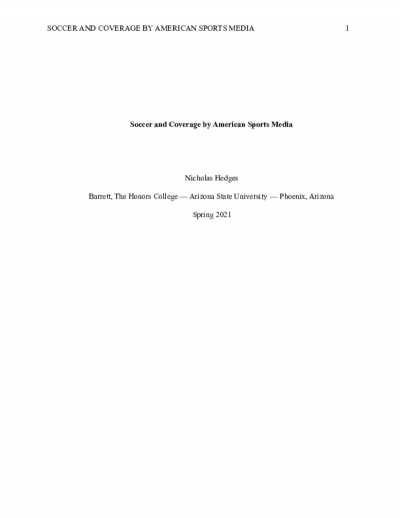 This study utilized a literature review and an analysis of Google Trends and Google News data in order to investigate the coverage that American men’s soccer gets from the media compared to that given to other major American sports. The literature review called upon a variety of peer-reviewed, scholarly entries, as well as journalistic articles and stories, to holistically argue that soccer receives short-sighted coverage from the American media. This section discusses topics such as import substitution, stardom, and American exceptionalism. The Google analysis consisted of 30 specific comparisons in which one American soccer player was compared to another athlete playing in one of America’s major sports leagues. These comparisons allowed for concrete measurements in the difference in popularity and coverage between soccer players and their counterparts. Overall, both the literature review and Google analysis yielded firm and significant evidence that the American media’s coverage of soccer is lopsided, and that they do play a role in the sport’s difficulty to become popular in the American mainstream.