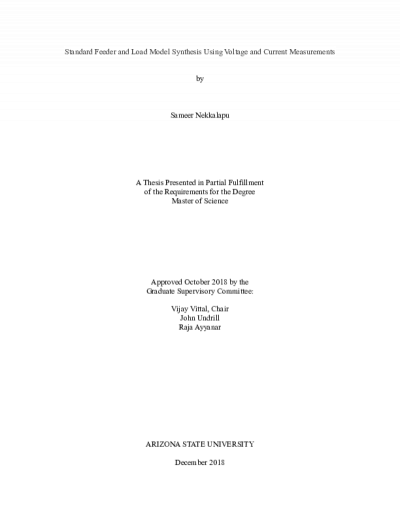 Until late 1970’s the primary focus in power system modeling has been largely directed towards power system generation and transmission. Over the years, the importance of load modeling grew and…

Until late 1970’s the primary focus in power system modeling has been largely directed towards power system generation and transmission. Over the years, the importance of load modeling grew and having an accurate representation of load played an important role in the planning and operation studies. With an emphasis on tackling the topic of load modeling, this thesis presents the following intermediary steps in developing accurate load models:

1. Synthesis of a three-phase standard feeder and load model using the measured voltages and currents, for events such as faults and feeder pickup cases, obtained at the head of the feeder.

2. Investigated the impact of the synthesized standard feeder and load model on the sub-transmission system for a feeder pick-up case.

In the first phase of this project, a standard feeder and load model had been synthesized by capturing the current transients when three-phase voltage measurements (obtained from a local electric utility) are played-in as input to the synthesized model. The comparison between the measured currents and the simulated currents obtained using an electromagnetic transient analysis software (PSCAD) are made at the head of the designed feeder. The synthesized load model has a load composition which includes impedance loads, single-phase induction motor loads and three-phase induction motor loads. The parameters of the motor models are adjusted to obtain a good correspondence between measured three-phase currents and simulated current responses at the head of the feeder when subjected to events under which measurements were obtained on the feeder. These events include faults which occurred upstream of the feeder at a higher voltage level and a feeder pickup event that occurred downstream from the head of the feeder. Two different load compositions have been obtained for this feeder and load model depending on the types of load present in the surrounding area (residential or industrial/commercial).

The second phase of this project examines the impact of the feeder pick-up event on the 69 kV sub-transmission system using the obtained standard feeder and load model. Using the 69 kV network data obtained from a local utility, a sub-transmission network has been built in PSCAD. The main difference between the first and second phase of this project is that no measurements are played-in to the model in the latter case. Instead, the feeder pick-up event at a particular substation is simulated using the reduced equivalent of the 69 kV sub-transmission circuit together with the synthesized three-phase models of the feeder and the loads obtained in the first phase of the project. Using this analysis, it is observed that a good correspondence between the PSCAD simulated values of both three-phase voltages and currents with their corresponding measured responses at the substation is achieved.