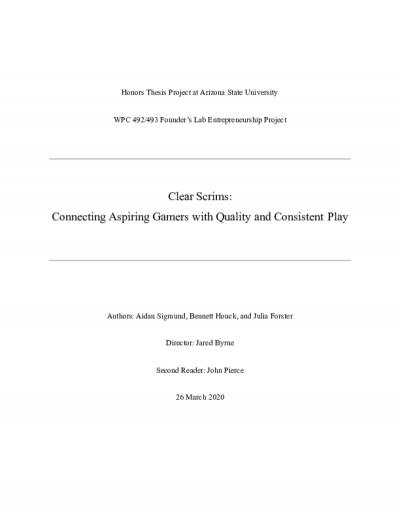 Esports is a rapidly growing virtual competitive space that is projected to surpass physical sports in the near future. Given that Esports is considered to be in its infancy, it…

Esports is a rapidly growing virtual competitive space that is projected to surpass physical sports in the near future. Given that Esports is considered to be in its infancy, it has only been recently introduced at the high school level. Our group connected with local high school Esports teams in order to evaluate its efficiency. We found that players at this level are lacking a connection to other competitive teams and consistent practice. In the Esports world, practice with another team of equal level is called a “scrim”. In an effort to combat this issue, we created a platform named Clear Scrims to connect high school and collegiate Esport teams across the country with other teams of equivalent level. This platform will allow individuals to sign up, register with their competitive team, and provide available times to scrim. The platform then would be able to use their self-reported ingame rank to match them with worthy opponents for the most quality scrim experience. Teams playing into the growing sector of Esports need a structure like Clear Scrims to increase skill level and communication. In addition, our platform has a review component where teams and individuals score their opponent to see if they played as advertised. This component will help specify our matchmaking program but also work to dismantle the culture of bad manners or toxicity in Esports. Our site, Clear Scrims, will engender more competition and thus more opportunities for players to practice and hone in their skills.