This study assessed the spatial distribution of vulnerability to extreme heat in 1990 and 2000 within metropolitan Phoenix based on an index of seven equally weighted measures of physical exposure and adaptive capacity. These measures were derived from spatially interpolated climate, normalized differential vegetation index, and U.S. Census data. From resulting vulnerability maps, we also analyzed population groups living in areas of high heat vulnerability. Results revealed that landscapes of heat vulnerability changed substantially in response to variations in physical and socioeconomic factors, with significant alterations to spatial distribution of vulnerability especially between eastern and western sectors of Phoenix. These changes worked to the detriment of Phoenix's Hispanic population and the elderly concentrated in urban-fringe retirement communities. 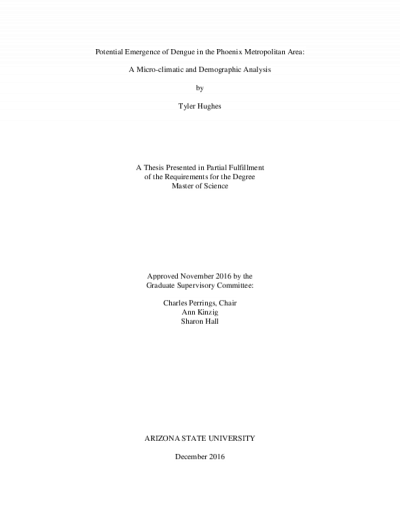 Potential emergence of dengue in the Phoenix Metropolitan Area: a micro-climatic and demographic analysis

The spread of dengue worldwide currently places half of the world’s population at risk. In the absence of a dengue vaccine, control of the disease requires control of the mosquito…

The spread of dengue worldwide currently places half of the world’s population at risk. In the absence of a dengue vaccine, control of the disease requires control of the mosquito species that transmit the virus. The most important of these is. Advances in research detailing the responsiveness of Aedes aegypti to small changes in climate enable the production of more sophisticated remote sensing and surveillance techniques for monitoring these populations. Close monitoring of global dengue activity and outbreaks likewise enables a greater specificity when determining to which human populations the virus is most likely to spread. There have been no locally acquired cases in Arizona to date, but the high abundance of Aedes aegypti in the Phoenix Metropolitan area raises concern within the Arizona Department of Health Services over the potential transmission of dengue in the city. This study develops a model that combines mosquito abundance, micro-climatic and demographic information to delineate regions in Phoenix that are most support transmission of dengue. The first chapter focuses on the impact that daytime high and low temperatures have on Aedes aegypti’s ability to become infectious with dengue. It argues that NDVI (normal difference vegetative index) imaging of the Phoenix area can be used to plot areas where mosquitoes are most likely to become competent vectors. The second chapter focuses on the areas in the city where mosquitoes are most likely to be exposed to the virus. Based on proximity to Phoenix and the high volume of traffic across the Arizona-Mexico border, I treat the Mexican state of Sonora as the source of infection. I combine these two analyses, micro-climatic and demographic, to produce maps of Phoenix that show the locations with the highest likelihood of transmission overall.