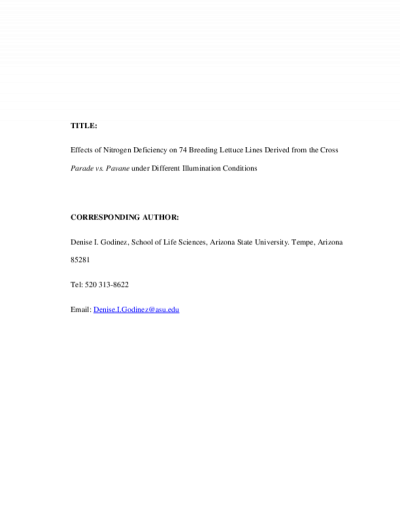 Effects of Nitrogen Deficiency on 74 Breeding Lettuce Lines Derived from the Cross Parade vs. Pavane under Different Illumination Conditions

The manner in which plants are able to acquire plant nitrate (NO3-) varies depending on a combination of distinct processes between "root high-and low-affinity NO-3 transporters and the proton gradient that is generated by the plasma membrane H+-ATPase" (Paez-Valencia et al, 2013). In this study we analyzed the response to limiting nitrate (0.5 mM) of seventy-four breeding lettuce (Lactuca sativa) lines derived from the cross Parade vs. Pavane. Parade had an enhanced root acidification capacity when grown under Nitrate limitation in comparison to Pavane, which had a poor root acidification capacity. Two successive experiments were conducted under distinct environmental conditions to evaluate the performance of the different breeding lines based on their ability to grow under nitrogen limitation as an indirect measurement of their ability to take up nitrate. Specific parameters were established in order to properly classify strong and weak breading lines based on the following characterizations: 1) Average fresh shoots and roots weights; 2) Color of leaves (green vs. yellow); and 3) Root acidification capacity. In essence, the measurement of these parameters is would allow for the identification of breeding lines that demonstrated enhanced performance under Nitrate limitation in order to observe if their performance correlated with root acidification capacity. The breeding line's biomass, indicated by the average fresh shoots and roots weights, determined the plant's ability to uptake Nitrogen; whereas, large biomass values indicated Nitrogen uptake, low values indicated a low Nitrogen uptake (Javadiyan, 2008). To determine Nitrogen nutrition, the colors of the plants' leaves were observed throughout the duration of the study; a green color demonstrated appropriate Nitrogen nutrition, whereas as a yellow color identified Nitrogen deficiency (Yang, 2003). In addition to the nutrients that composed the media in the agar plates, a pH indicator (Bromocresol Purple Dye) was utilized to monitor root acidification; the purple indicator transformed into a yellow color upon the occurrence of acidification. In both experiments, a direct correlation between the root acidification capacity and the biomass of each breeding line could not be determined. Strong breeding lines were identified when they demonstrated large biomass measurements, which were obtained from the average fresh shoots and roots, and also a proper nitrogen nutrition status, which was shown through their green leaf phenotypic characteristics. These two characterizations were significantly prevalent in four breeding lines (B9, B17, C1, and C21), which on average outperformed the parental lines (Controls: P12 and P13).

Contributors
Agent
Created
Date Created
The date the item was original created (prior to any relationship with the ASU Digital Repositories.)
2013-05