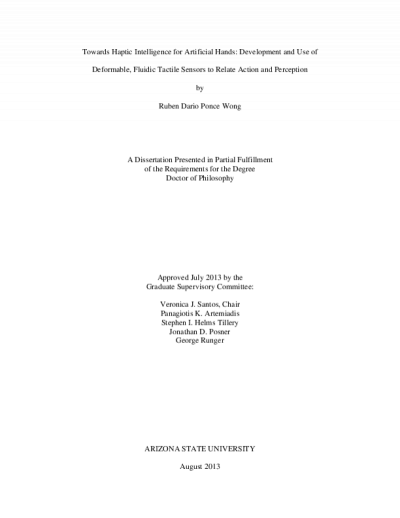 Towards haptic intelligence for artificial hands: development and use of deformable, fluidic tactile sensors to relate action and perception

Human fingertips contain thousands of specialized mechanoreceptors that enable effortless physical interactions with the environment. Haptic perception capabilities enable grasp and manipulation in the absence of visual feedback, as when…

Human fingertips contain thousands of specialized mechanoreceptors that enable effortless physical interactions with the environment. Haptic perception capabilities enable grasp and manipulation in the absence of visual feedback, as when reaching into one's pocket or wrapping a belt around oneself. Unfortunately, state-of-the-art artificial tactile sensors and processing algorithms are no match for their biological counterparts. Tactile sensors must not only meet stringent practical specifications for everyday use, but their signals must be processed and interpreted within hundreds of milliseconds. Control of artificial manipulators, ranging from prosthetic hands to bomb defusal robots, requires a constant reliance on visual feedback that is not entirely practical. To address this, we conducted three studies aimed at advancing artificial haptic intelligence. First, we developed a novel, robust, microfluidic tactile sensor skin capable of measuring normal forces on flat or curved surfaces, such as a fingertip. The sensor consists of microchannels in an elastomer filled with a liquid metal alloy. The fluid serves as both electrical interconnects and tunable capacitive sensing units, and enables functionality despite substantial deformation. The second study investigated the use of a commercially-available, multimodal tactile sensor (BioTac sensor, SynTouch) to characterize edge orientation with respect to a body fixed reference frame, such as a fingertip. Trained on data from a robot testbed, a support vector regression model was developed to relate haptic exploration actions to perception of edge orientation. The model performed comparably to humans for estimating edge orientation. Finally, the robot testbed was used to perceive small, finger-sized geometric features. The efficiency and accuracy of different haptic exploratory procedures and supervised learning models were assessed for estimating feature properties such as type (bump, pit), order of curvature (flat, conical, spherical), and size. This study highlights the importance of tactile sensing in situations where other modalities fail, such as when the finger itself blocks line of sight. Insights from this work could be used to advance tactile sensor technology and haptic intelligence for artificial manipulators that improve quality of life, such as prosthetic hands and wheelchair-mounted robotic hands. 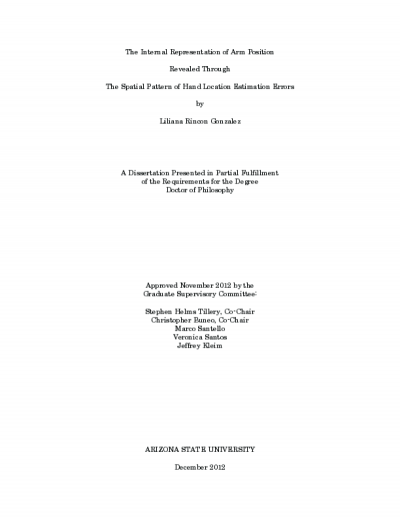 Our ability to estimate the position of our body parts in space, a fundamentally proprioceptive process, is crucial for interacting with the environment and movement control. For proprioception to support…

Our ability to estimate the position of our body parts in space, a fundamentally proprioceptive process, is crucial for interacting with the environment and movement control. For proprioception to support these actions, the Central Nervous System has to rely on a stored internal representation of the body parts in space. However, relatively little is known about this internal representation of arm position. To this end, I developed a method to map proprioceptive estimates of hand location across a 2-d workspace. In this task, I moved each subject's hand to a target location while the subject's eyes were closed. After returning the hand, subjects opened their eyes to verbally report the location of where their fingertip had been. Then, I reconstructed and analyzed the spatial structure of the pattern of estimation errors. In the first couple of experiments I probed the structure and stability of the pattern of errors by manipulating the hand used and tactile feedback provided when the hand was at each target location. I found that the resulting pattern of errors was systematically stable across conditions for each subject, subject-specific, and not uniform across the workspace. These findings suggest that the observed structure of pattern of errors has been constructed through experience, which has resulted in a systematically stable internal representation of arm location. Moreover, this representation is continuously being calibrated across the workspace. In the next two experiments, I aimed to probe the calibration of this structure. To this end, I used two different perturbation paradigms: 1) a virtual reality visuomotor adaptation to induce a local perturbation, 2) and a standard prism adaptation paradigm to induce a global perturbation. I found that the magnitude of the errors significantly increased to a similar extent after each perturbation. This small effect indicates that proprioception is recalibrated to a similar extent regardless of how the perturbation is introduced, suggesting that sensory and motor changes may be two independent processes arising from the perturbation. Moreover, I propose that the internal representation of arm location might be constructed with a global solution and not capable of local changes. 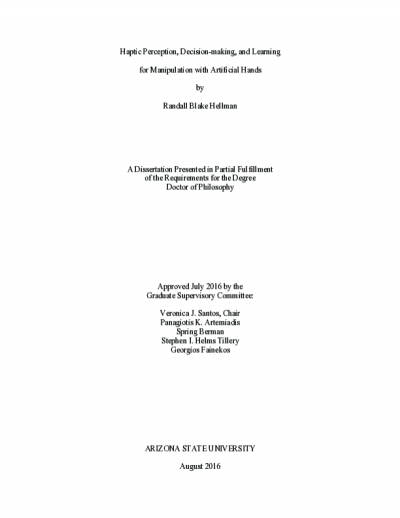 Haptic perception, decision-making, and learning for manipulation with artificial hands

Robotic systems are outmatched by the abilities of the human hand to perceive and manipulate the world. Human hands are able to physically interact with the world to perceive, learn,…

Robotic systems are outmatched by the abilities of the human hand to perceive and manipulate the world. Human hands are able to physically interact with the world to perceive, learn, and act to accomplish tasks. Limitations of robotic systems to interact with and manipulate the world diminish their usefulness. In order to advance robot end effectors, specifically artificial hands, rich multimodal tactile sensing is needed. In this work, a multi-articulating, anthropomorphic robot testbed was developed for investigating tactile sensory stimuli during finger-object interactions. The artificial finger is controlled by a tendon-driven remote actuation system that allows for modular control of any tendon-driven end effector and capabilities for both speed and strength. The artificial proprioception system enables direct measurement of joint angles and tendon tensions while temperature, vibration, and skin deformation are provided by a multimodal tactile sensor. Next, attention was focused on real-time artificial perception for decision-making. A robotic system needs to perceive its environment in order to make decisions. Specific actions such as “exploratory procedures” can be employed to classify and characterize object features. Prior work on offline perception was extended to develop an anytime predictive model that returns the probability of having touched a specific feature of an object based on minimally processed sensor data. Developing models for anytime classification of features facilitates real-time action-perception loops. Finally, by combining real-time action-perception with reinforcement learning, a policy was learned to complete a functional contour-following task: closing a deformable ziplock bag. The approach relies only on proprioceptive and localized tactile data. A Contextual Multi-Armed Bandit (C-MAB) reinforcement learning algorithm was implemented to maximize cumulative rewards within a finite time period by balancing exploration versus exploitation of the action space. Performance of the C-MAB learner was compared to a benchmark Q-learner that eventually returns the optimal policy. To assess robustness and generalizability, the learned policy was tested on variations of the original contour-following task. The work presented contributes to the full range of tools necessary to advance the abilities of artificial hands with respect to dexterity, perception, decision-making, and learning.