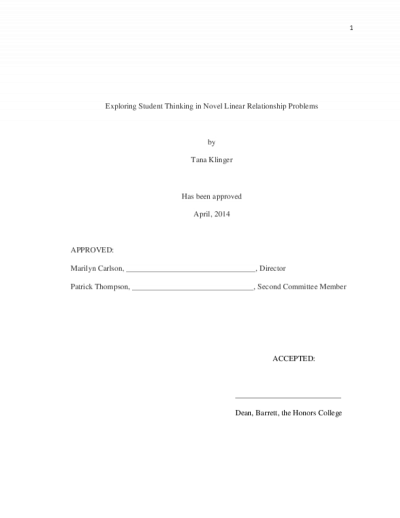 This is a report of a study that investigated the thinking of a high-achieving precalculus student when responding to tasks that required him to define linear formulas to relate covarying quantities. Two interviews were conducted for analysis. A team of us in the mathematics education department at Arizona State University initially identified mental actions that we conjectured were needed for constructing meaningful linear formulas. This guided the development of tasks for the sequence of clinical interviews with one high-performing precalculus student. Analysis of the interview data revealed that in instances when the subject engaged in meaning making that led to him imagining and identifying the relevant quantities and how they change together, he was able to give accurate definitions of variables and was usually able to define a formula to relate the two quantities of interest. However, we found that the student sometimes had difficulty imagining how the two quantities of interest were changing together. At other times he exhibited a weak understanding of the operation of subtraction and the idea of constant rate of change. He did not appear to conceptualize subtraction as a quantitative comparison. His inability to conceptualize a constant rate of change as a proportional relationship between the changes in two quantities also presented an obstacle in his developing a meaningful formula that relied on this understanding. The results further stress the need to develop a student's ability to engage in mental operations that involve covarying quantities and a more robust understanding of constant rate of change since these abilities and understanding are critical for student success in future courses in mathematics.