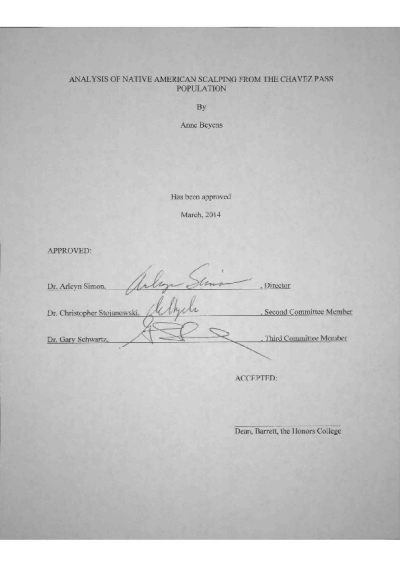 Analysis of Native American Scalping from the Chavez Pass Population

Scalping has been practiced by the Native Americans since pre-Columbian times in North America and is observed as cut-marks in the form of a rough circle on the superior aspect of the cranium of the individual. For this study, there are 7 crania with cut-marks evident of scalping from the Southwest population of Chavez Pass. These crania were excavated from the site of Nuvakwewtaqa located in north-central Arizona, in the middle of the Coconino National Forest. Unfortunately, the site was heavily looted through pot-hunter activity, leading to a large collection of commingle remains. The objectives of this study are summarized into three basic question words: Who? Where? And, How? More specifically: [1] whether there is a relationship between age or sex and being a victim of scalping; [2] whether there is a relationship between the burial location and having been scalped; and, [3] whether the age or sex of an individual affected the manner in which they were scalped. For this analysis of scalping, three statistical tests were used: Fisher's exact test, Chi-Square test and two-sample t-tests.