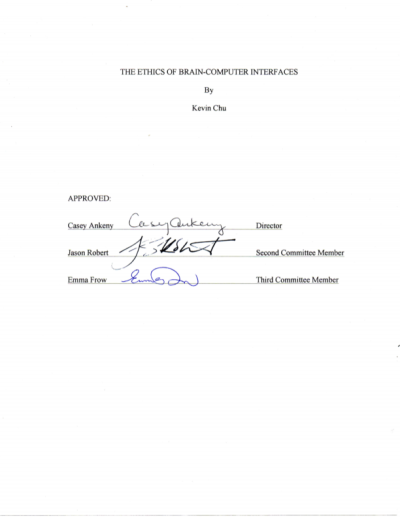 The Ethics of Brain-Computer Interfaces

The development of computational systems known as brain-computer interfaces (BCIs) offers the possibility of allowing individuals disabled by neurological disorders such as Amyotrophic Lateral Sclerosis (ALS) and ischemic stroke the ability to perform relatively complex tasks such as communicating with others and walking. BCIs are closed-loop systems that record physiological signals from the brain and translate those signals into commands that control an external device such as a wheelchair or a robotic exoskeleton. Despite the potential for BCIs to vastly improve the lives of almost one billion people, one question arises: Just because we can use brain-computer interfaces, should we? The human brain is an embodiment of the mind, which is largely seen to determine a person's identity, so a number of ethical and philosophical concerns emerge over current and future uses of BCIs. These concerns include privacy, informed consent, autonomy, identity, enhancement, and justice. In this thesis, I focus on three of these issues: privacy, informed consent, and autonomy. The ultimate purpose of brain-computer interfaces is to provide patients with a greater degree of autonomy; thus, many of the ethical issues associated with BCIs are intertwined with autonomy. Currently, brain-computer interfaces exist mainly in the domain of medicine and medical research, but recently companies have started commercializing BCIs and providing them at affordable prices. These consumer-grade BCIs are primarily for non-medical purposes, and so they are beyond the scope of medicine. As BCIs become more widespread in the near future, it is crucial for interdisciplinary teams of ethicists, philosophers, engineers, and physicians to collaborate to address these ethical concerns now before BCIs become more commonplace.