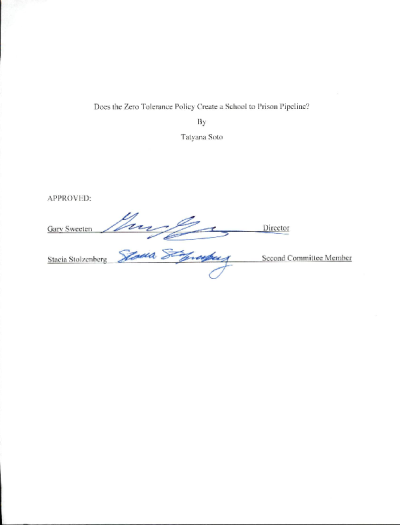 Does the Zero Tolerance Policy Create a School to Prison Pipeline?

The Zero Tolerance Policy began appearing in secondary schools in the early 1990's. In the late 1980's, crimes committed by juveniles were at an all-time high. Fears that the violence…

The Zero Tolerance Policy began appearing in secondary schools in the early 1990's. In the late 1980's, crimes committed by juveniles were at an all-time high. Fears that the violence would spill onto campus propelled lawmakers and school officials to take preventative measures. With the creation of the Gun-Free School Zone Act of 1990 and Gun-Free Act of 1994, any individual caught with a weapon on campus would be found in violation of the Act and be punishable by law. In addition to the Acts, School Resource Officers (SROs) became more prominent on campus. SROs were originally on campus to teach drug prevention programs, however SROs began to take on more of a disciplinary role to support the Zero Tolerance Policy. Furthermore, educators began turning towards SROs to handle less serious incidents such as behavioral outbursts. As SROs took a more active role, arrests among students started to rise. Many think this is a direct pathway to our criminal justice system, more commonly known as the school-to-prison pipeline. This pipeline disproportionately affects African Americans. This paper will examine the creation, aims and purpose of the Zero Tolerance Policy as well as what incidents helped create and install the policy. This paper will look at what the Zero Tolerance Policy looks like since it has been enacted. Moreover, there will be a focus on which students are affected the most and if this policy will lead to criminal justice contact in the future. Lastly, alternatives to the Zero Tolerance Policy will be discussed and if the policy can be improved or should it be eliminated.