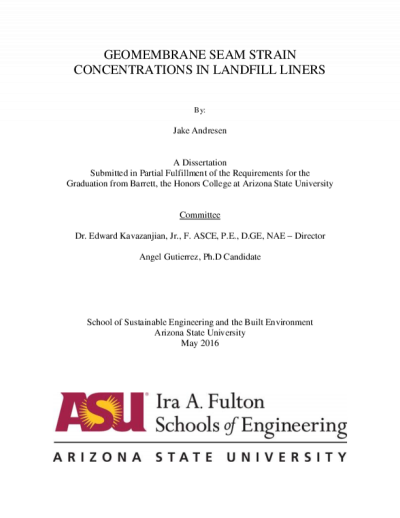 This dissertation details an attempt to experimentally evaluate the Giroud et al. (1995) concentration factors for geomembranes loaded in tension perpendicular to a seam by laboratory measurement. Field observations of the performance of geomembrane liner systems indicates that tears occur…

This dissertation details an attempt to experimentally evaluate the Giroud et al. (1995) concentration factors for geomembranes loaded in tension perpendicular to a seam by laboratory measurement. Field observations of the performance of geomembrane liner systems indicates that tears occur at average strains well below the yield criteria. These observations have been attributed, in part, to localized strain concentrations in the geomembrane loaded in tension in a direction perpendicular to the seam. Giroud et al. (1995) has presented theoretical strain concentration factors for geomembrane seams loaded in tension when the seam is perpendicular to the applied tensile strain. However, these factors have never been verified. This dissertation was prepared in fulfillment of the requirements for graduation from Barrett, the Honors College at Arizona State University. The work described herein was sponsored by the National Science Foundation as a part of a larger research project entitled "NEESR: Performance Based Design of Geomembrane Liner Systems Subject to Extreme Loading." The work is motivated by geomembrane tears observed at the Chiquita Canyon landfill following the 1994 Northridge earthquake. Numerical analysis of the strains in the Chiquita Canyon landfill liner induced by the earthquake indicated that the tensile strains, were well below the yield strain of the geomembrane material. In order to explain why the membrane did fail, strain concentration factors due to bending at seams perpendicular to the load in the model proposed by Giroud et al. (1995) had to be applied to the geomembrane (Arab, 2011). Due to the localized nature of seam strain concentrations, digital image correlation (DIC) was used. The high resolution attained with DIC had a sufficient resolution to capture the localized strain concentrations. High density polyethylene (HDPE) geomembrane samples prepared by a leading geomembrane manufacturer were used in the testing described herein. The samples included both extrusion fillet and dual hot wedge fusion seams. The samples were loaded in tension in a standard triaxial test apparatus. to the seams in the samples including both extrusion fillet and dual hot wedge seams. DIC was used to capture the deformation field and strain fields were subsequently created by computer analysis.