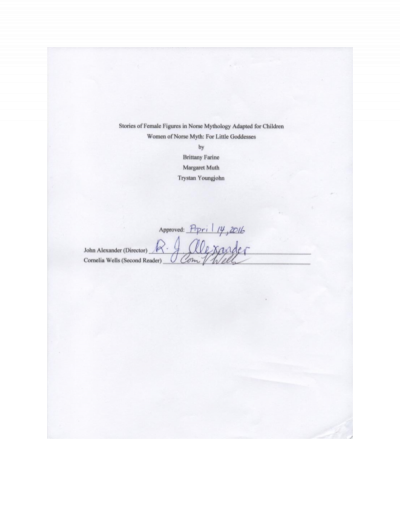 Stories of Female Figures in Norse Mythology Adapted for Children:Women of Norse Myth: For Little Goddesses

Popular culture tends to downplay strong female characters to favor a plethora of male figures that children look up to as heroes. This creates a gender imbalance in exposure to…

Popular culture tends to downplay strong female characters to favor a plethora of male figures that children look up to as heroes. This creates a gender imbalance in exposure to inspirational characters that children can look up to as role models. For our team's creative project, we chose to write and illustrate a children's book mainly targeted at young girls, ages eight to twelve that focuses on the stories of selected female figures of Norse mythology. The five stories in our collection focus on the figures Frigg, Skadi, Elli, Idunn, and Freya and are inspired by the mythology contained in the Prose Edda by Snorri Sturluson and selected medieval texts on the Germanic Lombard tribe. Through our book, Women of Norse Myth: For Little Goddesses, we wanted to introduce children to Norse mythology, a branch of myth that is often overshadowed by more popular mythologies such as Roman and Greek. Additionally, our goal was to bring light to the female figures within Norse myth that are generally given less attention than their male counterparts. Keeping in mind these goals, the stories were adapted from the original myths in a manner that would be suitable for a young audience as well as our aim for female empowerment. The final manuscript contains an introduction to Norse cosmology, introductions to the figures, a glossary of Norse terms used, and the illustrated stories themselves. Together with our combined talents, interests, and goals, Women of Norse Myth: For Little Goddesses was completed, and we hope that someday it can be published and serve as a fun and inspiring storybook for children to read and learn from.

As part of a group project, myself and four teammates created an interactive children's storybook based off of the "Young Lady's Illustrated Primer" in Neal Stephenson's novel The Diamond Age.…

As part of a group project, myself and four teammates created an interactive children's storybook based off of the "Young Lady's Illustrated Primer" in Neal Stephenson's novel The Diamond Age. This electronic book is meant to be read aloud by a caregiver with their child, and is designed for reading over long distances through the use of real-time voice and video calling. While one part of the team focused on building the electronic book itself and writing the program, myself and two others wrote the story and I provided illustrations. Our Primer tells the story of a young princess named Charname (short for character name) who escapes from a tower and goes on a mission to save four companions to help her on her quest. The book is meant for reader-insertion, and teaches children problem-solving, teamwork, and critical thinking skills by presenting challenges for Princess Charname to solve. The Primer borrows techniques from modern video game design, focusing heavily on interactivity and feelings of agency through offering the child choices of how to proceed, similar to choose-your-own-adventure books. If brought to market, the medium lends itself well to expanded quests and storylines for the child to explore as they learn and grow. Additionally, resources are provided for the narrator to help create an engaging experience for the child, based off of research on parent-child cooperative reading and cooperative gameplay. The final version of the Primer included a website to run the program, a book-like computer to access the program online, and three complete story segments for the child and narrator to read together.