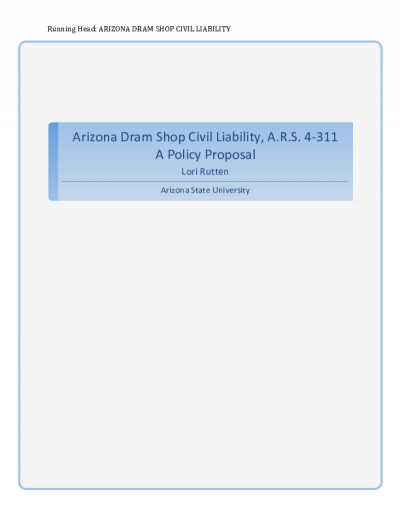 Arizona’s Dram Shop Statute, specifically ARS 4-311, was enacted in 1986 to hold liquor licensees financially responsible for any injuries or deaths that arise from the service and consumption of alcohol by customers of their establishment. The intent of such…

Arizona’s Dram Shop Statute, specifically ARS 4-311, was enacted in 1986 to hold liquor licensees financially responsible for any injuries or deaths that arise from the service and consumption of alcohol by customers of their establishment. The intent of such policies was to mitigate instances of driving under the influence of alcohol. However, evidence shows that such statutes have little to no effect on incidents of drunk driving in the State of Arizona, yet are detrimental to the viability of local restaurants and bars. The full liability that businesses in this industry face has an adverse effect on the following:

• The ability of establishments to obtain and maintain insurance coverage
• Limits the number of insurance carriers in Arizona, which increases the cost of such coverage.
• Expensive insurance directly affects business profitability:
o restricting their ability to make capital purchases
o limiting their ability to make local investments
o reduces state income tax revenue
o the need to reduce their staff or close their doors completely
o less money that any local business can bring to their bottom line is less money that they are able to
o reinvest in their community, their city, and in their state

In an effort to reduce the burdens imposed on Arizona’s restaurant and bar industry, I propose legislative changes to Arizona Revised Statute 4-311. These legislative changes would not only aid these small businesses in their efforts to be profitable and serve their communities, but would be beneficial to local cities and the State of Arizona alike. I would propose the following:

• Place a burden of proof on the plaintiff that a customer was served in an “obviously intoxicated” state as defined in A.R.S 4-311 (D), diminishing the ability to file suits based solely on the driver’s BAC of .08 or above.
• Strike all claims with basis on “known or should have known” judge made and judge applied common law standard that has not been incorporated in to the Arizona Dram Shop Statutes through legislation.

With these changes to Arizona Dram Shop Statutes, local restaurants and bars could contribute not only to their local economies, but also to support deterrence of the crime through a .5% tax on liquor sales generated through the sale of such in a liquor licensed establishment. This tax would amount to approximately $27* million dollars annually for the State of Arizona. This additional tax revenue would go directly to their local police departments to specifically fund increased efforts to deter instances of drunk driving. This deterrence could be achieved through increased police presence, hiring and training officers in the specialty of detecting drunk drivers, and/or conducting additional sobriety checkpoints throughout the state. Currently, a few other states (MD 9%, MN 2.5%, ND 7%, D.C 10%) have implemented a small tax on retail sales of liquor in addition to the various excise tax imposed at the wholesale and/or manufacturing level.