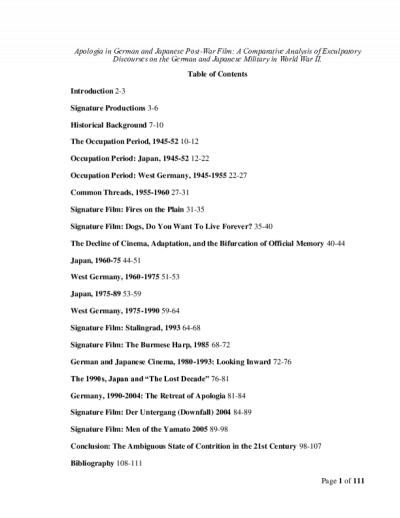 In the sixty-seven years following the end of World War II, West Germany and Japan underwent a remarkable series of economic and social changes that irrevocably altered their respective ways of life. Formerly xenophobic, militaristic and highly socially stratified societies,…

In the sixty-seven years following the end of World War II, West Germany and Japan underwent a remarkable series of economic and social changes that irrevocably altered their respective ways of life. Formerly xenophobic, militaristic and highly socially stratified societies, both emerged from the 20th Century as liberal, prosperous and free. Both made great strides well beyond the expectations of their occupiers, and rebounded from the overwhelming destruction of their national economies within a few short decades. While these changes have yielded dramatic results, the wartime period still looms large in their respective collective memories. Therefore, an ongoing and diverse dialectical process would engage the considerable popular, official, and intellectual energy of their post-war generations. In West Germany, the term Vergangenheitsbewältigung (VGB) emerged to describe a process of coming to terms with the past, while the Japanese chose kako no kokufuku to describe their similar historical sojourns. Although intellectuals of widely varying backgrounds in both nations made great strides toward making Japanese and German citizens cognizant of the roles that their militaries played in gruesome atrocities, popular cinematic productions served to reiterate older, discredited assertions of the fundamental honor and innocence of the average soldier, thereby nurturing a historically revisionist line of reasoning that continues to compete for public attention. All forms of media would play an important role in sustaining this “apologetic narrative,” and cinema, among the most popular and visible of these mediums, was not excluded from this. Indeed, films would play a unique recurring role, like rhetorical time capsules, in offering a sanitized historical image of Japanese and German soldiers that continues to endure in modern times. Nevertheless, even as West Germany and Japan regained their sovereignty and re-examined their pasts with ever greater resolution and insight, their respective film industries continued to “reset” the clock, and accentuated the visibility and relevancy of apologetic forces still in existence within both societies. However, it is important to note that, when speaking of “Germans” and “Japanese,” that they are not meant to be thought of as being uniformly of one mind or another. Rather, the use of these words is meant as convenient shorthand to refer to the dominant forces in Japanese and German civil society at any given time over the course of their respective post- war histories. Furthermore, references to “Germany” during the Cold War period are to be understood to mean the Federal Republic of Germany, rather than their socialist counterpart, the German Democratic Republic, a nation that undertook its own coming to terms with the past in an entirely distinct fashion.

Contributors
Agent
Created
Date Created
The date the item was original created (prior to any relationship with the ASU Digital Repositories.)
2012-12