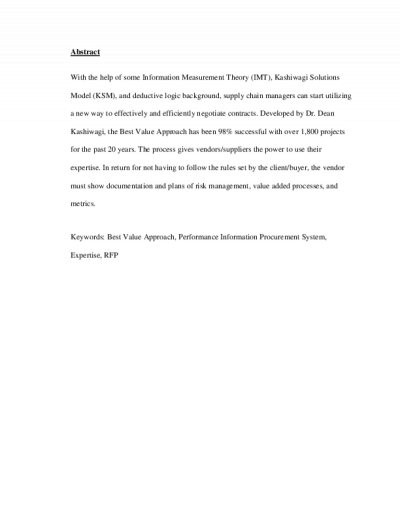 With the help of some Information Measurement Theory (IMT), Kashiwagi Solutions Model (KSM), and deductive logic background, supply chain managers can start utilizing a new way to effectively and efficiently negotiate contracts. Developed by Dr. Dean Kashiwagi, the Best Value Approach has been 98% successful with over 1,800 projects for the past 20 years. The process gives vendors/suppliers the power to use their expertise. In return for not having to follow the rules set by the client/buyer, the vendor must show documentation and plans of risk management, value added processes, and metrics. 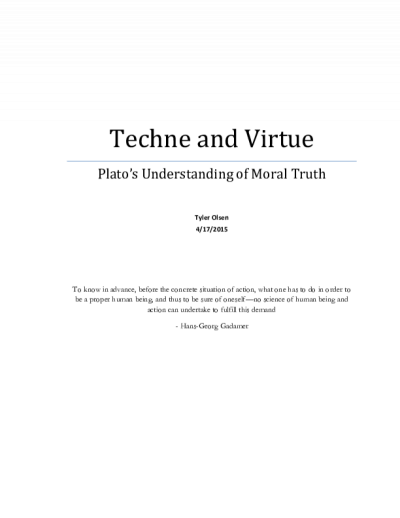 I will examine the relation between techne and virtue as it appears in Plato‘s dialogues and suggest that in order to adequately confront our greatest political and social challenges our understanding must move beyond mere scientific and technical knowledge and our practices must move beyond the political art taught by Gorgias and Protagoras. It is my belief that the Platonic conception of virtue and the political art that aims toward that conception of virtue offer a paradigm that can help remedy today‘s arguably technocratic political condition. I begin this work by exploring the nature of techne as it was understood in ancient Greece, and arguing (contra Irwin) that Plato did not hold a technical conception of justice. Whereas each techne establishes an eidos (idea, form, blueprint) in advance, which can be clearly known and uniformly applied in each particular case, I argue that Plato‘s conception of justice leaves all substantive content to be filled out in each concrete situation, precluding the possibility of the anticipatory disposition that techne affords and demanding a certain degree of deliberation in each situation, with attention paid to the unique aspects of each particular set of circumstances. I argue that this conception of justice informs Plato's notion of a "political art" and suggest that this art requires constant attention to the unique attributes of each particular situation in which we find ourselves, and that the pre-interpretive prejudice of many modern ideologies and political-economic perspectives hinders our ability to see the particularity in each situation and thereby reduces our capacity for achieving justice in the historically-situated, concrete moment within which we always must act.