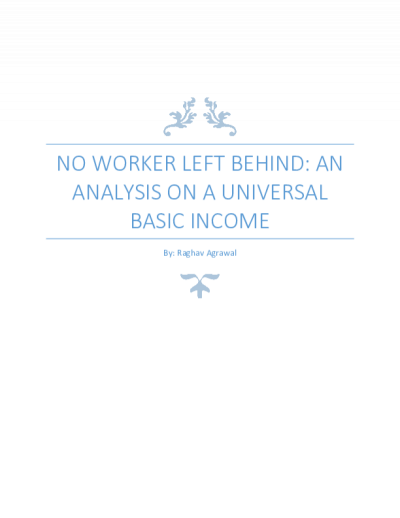 No Worker Left Behind: An Analysis on a Universal Basic Income

Many fear that the growth of automation and artificial intelligence will lead to massive unemployment since human labor would no longer be needed. Although automation does displace workers from their current jobs, it is unclear the total net effect on…

Many fear that the growth of automation and artificial intelligence will lead to massive unemployment since human labor would no longer be needed. Although automation does displace workers from their current jobs, it is unclear the total net effect on jobs this period of advancement will have. One possible solution to help displaced workers is a Universal Basic Income. A Universal Basic Income(UBI) is a set payment paid to all members of society regardless of working status. Compared to current unemployment programs, a Universal Basic Income does not restrict participants in how to spend the money and is more inclusive. This paper examines the effects of a UBI on a person's motivation to work through a study on current college students. There is reason to believe that a Universal Basic Income will lead to fewer people working as people may become dependent on a base payment to meet their basic needs and not look for work. In addition, some people may drop out of their current jobs and rely on a UBI as their main form of income. The current literature does not offer a consensus opinion on this relationship and more studies are being completed with the threat of mass unemployment looming. This study shows the effects of a UBI on participants' willingness to work and then applies these results to the current economic model. With these results and new economic model, a decision about future policies surrounding a UBI can be made.

Contributors
Agent
Created
Date Created
The date the item was original created (prior to any relationship with the ASU Digital Repositories.)
2018-05 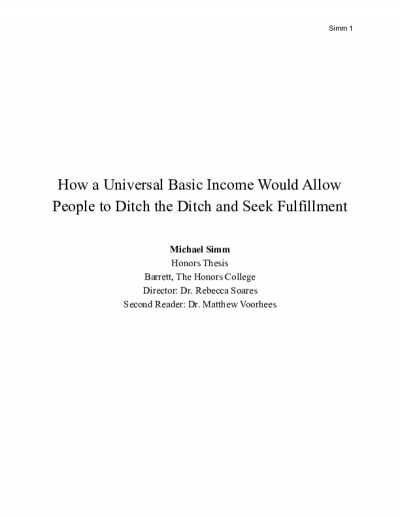 Universal Basic Income is a proposed policy where the government would regularly pay all citizens in cash. The idea of a Universal Basic Income (UBI) has had a resurgence in recent years because of popular figures like Andrew Yang and Elon Musk, but its history and potential implications go deep into the structure of human society. This thesis delves into how a basic income would transform social concepts of work and disrupt the personal economic model. With the bargaining power and freedom granted by a basic income, workers would find themselves in a position of work freedom and choice that has never existed in human history. With new freedom to do as they wish, the place of work in people’s lives needs to be reimagined as a source of fulfillment instead of an unlikeable but necessary part of everyday life. Workers will be given the choice to leave unfair or unfulfilling work and decide for themselves how they want to contribute within society. From increasing mental and economic well-being for most Americans to serving as a response to unemployment trends in the automated future, to encouraging greater business innovation, there are myriad ways in which basic incomes have the potential to benefit society. Framed by Martin Luther King Jr. and Franklin Delano Roosevelt as the only policy capable of abolishing poverty forever, Universal Basic income will be an important feature of transformative innovative policy advocacy until it is adopted by a major world government at which point the effects in practice will become clear.