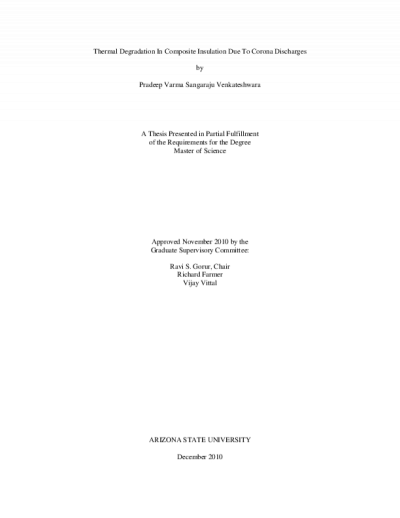 Thermal degradation in composite insulation due to corona discharges

Composite insulators on overhead lines are frequently subjected to corona discharges due to increased electric field intensities under various conditions. These discharges can cause localized heating on the surface and…

Composite insulators on overhead lines are frequently subjected to corona discharges due to increased electric field intensities under various conditions. These discharges can cause localized heating on the surface and affect the hydrophobicity of the insulator. A study has been undertaken to quantify and evaluate the thermal degradation that composite insulation is subjected to from corona discharges. This has been conducted primarily at the power frequency (60 Hz) and at the low frequency range (37 kHz). Point to plane corona discharge experiments have been performed in the laboratory at both the frequencies and varying levels of thermal degradation has been observed. The amplitude and the frequency of current spikes have been recorded at different voltage levels. A temperature model based on the amplitude and the frequency of current data has been formulated to calculate the maximum temperature attained due to these discharges. Visual thermal degradation has been found to set in at a low frequency range while there is no visual degradation observed at power frequency even when exposed to discharges for relatively much longer periods of time. However, microscopic experiments have been conducted which revealed degradation on the surface at 60 Hz. It has also been found that temperatures in excess of 300 Celsius have been obtained at 37 kHz. This corroborates the thermo gravimetric analysis data that proves thermal degradation in silicone rubber samples at temperatures greater than 300 Celsius. Using the above model, the maximum temperature rise can be evaluated due to discharges occurring on high voltage insulation. This model has also been used to calculate the temperature rise on medium voltage distribution equipment such as composite bushings and stand-off plugs. The samples were subjected to standard partial discharge tests and the corresponding discharge magnitudes have been recorded. The samples passed the tests and the corresponding temperatures plotted have been found to be within thermal limits of the respective insulation used on the samples. The experimental results concur with the theoretical model. A knowledge of the maximum temperatures attained due to these discharges can help in design of insulation with better thermal properties.