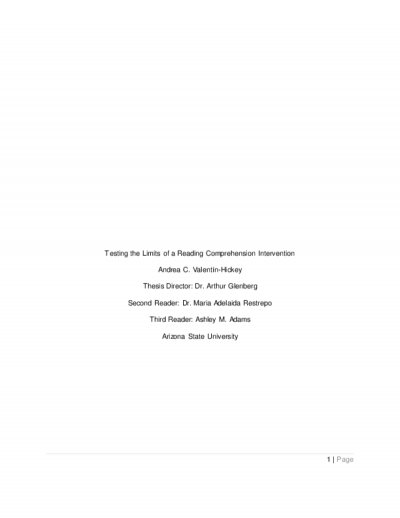 Testing the Limits of a Reading Comprehension Intervention

This study investigates whether children who are Dual Language Learners (DLLs) and who have poor reading comprehension will benefit from participating in the EMBRACE intervention. The reading comprehension program is based on the Theory of Embodied Cognition, which focuses on the embodied nature of language comprehension. Our understanding of language is based on mental representations that we create through experiences and are integrated with according sensorimotor information. Therefore, by engaging the motor and language system through reading stories on an iPad that prompt the children to manipulate images on-screen, we might improve children's reading strategies and comprehension scores. Fifty-six children participated in reading three stories and answering related questions over a period of two weeks. Results showed that the intervention was successful in increasing reading comprehension scores in the physical manipulation condition but not in the imaginary manipulation condition. Although lower motor skill scores positively correlated with lower comprehension skills, the children's motor deficits did not moderate their performance on the intervention. 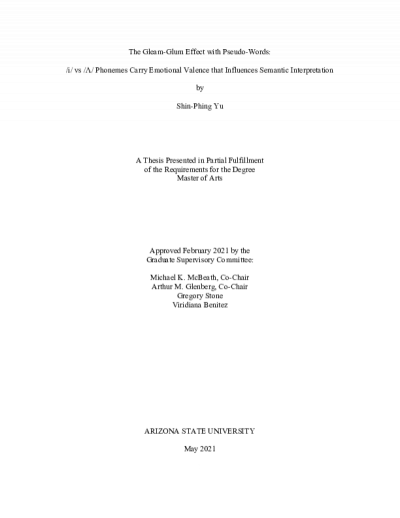 The Gleam-Glum Effect with Pseudo-Words: /i/ vs /Λ/ Phonemes Carry Emotional Valence that Influences Semantic Interpretation

I recently established the gleam-glum effect confirming in both English and Mandarin that words with the /i/ vowel-sound (like “gleam”) are rated more emotionally positive than matched words with the /ʌ/ vowel-sound (like “glum”). Here I confirm that these vowel sounds also influence the semantic perception of monosyllabic pseudo-words. In Experiment 1, 100 participants rated 50 individual /i/ monosyllabic pseudo-words (like “zeech”) as significantly more positive than 50 matched /ʌ/ pseudo-words (like “zuch”), replicating my previous findings with real words. Experiment 2 assessed the gleam-glum effect on pseudo-words using a forced-choice task. Participants (n = 148) were presented with the 50 pairs of pseudo-words used in Experiment 1 and tasked to guess the most likely meaning of each pseudo-word by matching them with one of two meaning words that were either extremely positive or extremely negative in affective valence (Warriner et al., 2013). I found a remarkably robust effect in which every one of the 50 pseudo-word pairs was on average more likely to have the /i/ word matched with the positive meaning word and /ʌ/ word with the negative one (exact binomial test, p < .001, z = 7.94). The findings confirm that the gleam-glum effect facilitates bootstrapping meaning of words from their pronunciations. These findings coupled with previous real word findings (Yu et al., in press), showing not only that the effect encompasses the entire English lexicon but can also be explained with an embodied facial musculature mechanism, is consistent with the idea that sound symbolism may shape vocabulary use of a language over time by influencing semantic perception.