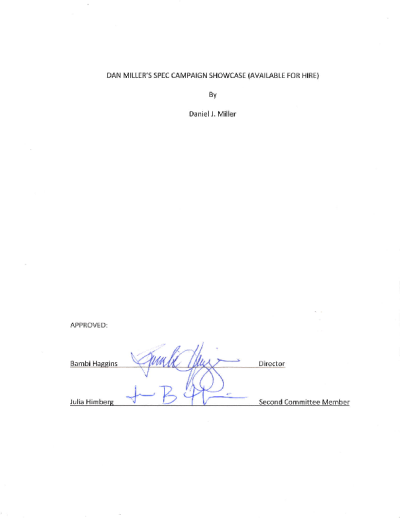 I've spent the last four-plus years in Arizona studying to earn a degree that hopefully will get me an interesting and well-paying job. Unfortunately, I'm not sure that my Filmmaking…

I've spent the last four-plus years in Arizona studying to earn a degree that hopefully will get me an interesting and well-paying job. Unfortunately, I'm not sure that my Filmmaking Practices degree will adequately describe what I've done with my time at Arizona State University. In addition to studying film, I spent my first year in the Walter Cronkite School of Journalism and Mass Communication; I wrote for, acted in, and later directed and hosted the webshow Devil's Chowda for The State Press; I did marketing for companies including HBO and RAW Rolling Papers; I performed improv comedy every week with Barren Mind Improv for two semesters; I wrote and acted in Farce Side Comedy Hour sketch comedy this past semester. It is clear that my interests do not lie in one area \u2014 my education is mostly in film, my resume is mostly marketing, and my extra-curricular interests lie mostly in comedy. To best prepare myself for the job market post-graduation, I believe that I need an example of my work to show a prospective employer that I have knowledge beyond how a camera works and the films of Steven Spielberg. To do this, I have chosen to create two spec advertising campaigns for large companies: Heinz and Burger King. This allows me to use my knowledge in film, marketing, and comedy all at once. The Heinz campaign revolves around real-world experiences of children using their French fry as a utensil rather than a food item. The Burger King campaign is based around a limited-time offer to get an entry code into a contest for a bathtub full of chicken nuggets. Each campaign is fleshed out with video advertisement storyboards, audio advertisement scripts, print advertisement mock-ups, and social media hashtags and plans. 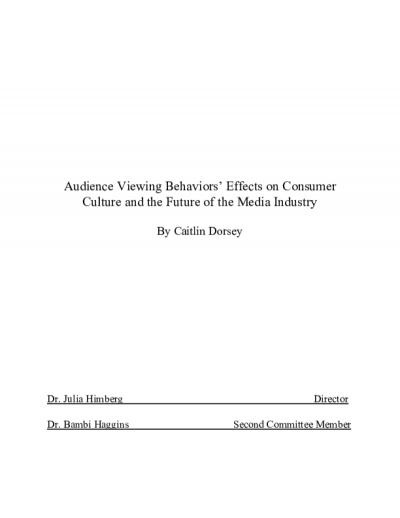 The television industry has experienced major changes in the past decade that have affected our behaviors, expectations, and perceptions of the world. New services offer different methods of consuming media…

The television industry has experienced major changes in the past decade that have affected our behaviors, expectations, and perceptions of the world. New services offer different methods of consuming media and shift the way the industry defines television. The following research reflects on past trends in television history and the current landscape in order to understand how television will continue to evolve, adapt, or return to old practices as it reacts to audiences' needs. From the growth of binge-watching to the proliferation of connected devices and digital technologies, the television industry faces many new challenges and opportunities. Consumers have shifted from the post-network era of cable's dominance to the leading online, digital services that enhance consumers' desires to have television anywhere and everywhere. Although these changes threaten the industry's current advertising models, they also present new ways for networks to connect with quality audiences, and thereby, shape our identities and consumer culture. This study analyzes the influence of these changes and considers how the current state of the television industry may continue to change in the future.