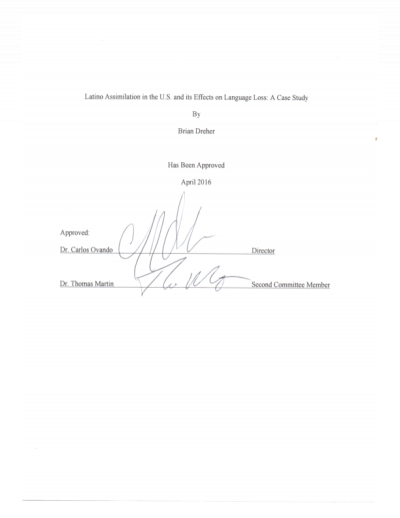 Latino Assimilation in the U.S. and its Effects on Language Loss: A Case Study

This thesis project investigated the linguistic competence of four brothers in an attempt to evaluate the effects that assimilation in the United States has on language loss within second generation speakers. The project employed the use of a case study and autoethnography in order to take a closer look at the concepts of assimilation, acculturation, and language loss, as well to provide a real world example of their interrelatedness. The second generation, or the heritage speakers in the family, were the focus of the study in order to provide a closer look at how the heritage language was retained within said generation. The project found that although there has historically been a push to assimilate immigrants into the American society, my brothers and I are not being assimilated as much as we are being acculturated. The project also found that although we grew up speaking Spanish at home, education in the language was essential in developing fluency in the subcategories of reading and writing, which are often neglected in the household.