This creative piece aims to blend theatre writing with my father’s career of professional golf. Research was conducted through interviews, scholarly articles, and conversations between my thesis director and second…

This creative piece aims to blend theatre writing with my father’s career of professional golf. Research was conducted through interviews, scholarly articles, and conversations between my thesis director and second reader. In the search for information and answers, I found the connection between my written style and personal experiences. This is important to me as a writer and any other aspiring writer, because it helps analyze strengths and create a more impactful story.

This entire creative piece is a testament to pursue writing in the film and theatre industry, and acts as a student’s own personal take on how creative writing can be developed, analyzed, and improved. The scope of this project was to better understand modern writing and playwrights by creating my own piece. The general findings in this project demonstrated the high difficulty that storytelling demands. Specifically, linking dialogue in plays to meaningful character development.

As such, a major conclusion indicates that masterful script writing falls on each character being fully developed so that they may move through scenes and the plot with the proper emotional stakes. 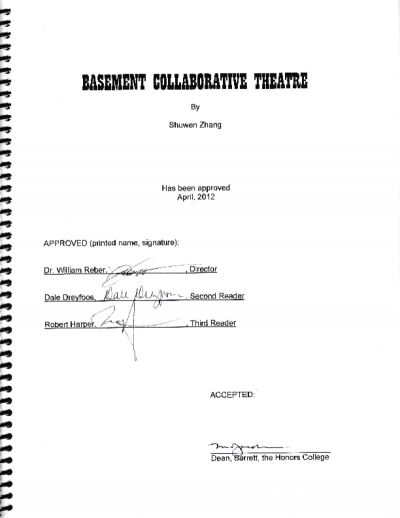 A student-run theatre company would give students more opportunities to perform. as well as opportunities to direct, design, and produce something that is not usually available to us. The main…

A student-run theatre company would give students more opportunities to perform. as well as opportunities to direct, design, and produce something that is not usually available to us. The main goal of the topic is to create a student-run theatre company that would be able to support three to four minimal, low budget productions each year that are directed, designed, and performed by the students. These productions could be works that are new or out of the mainstream, one-act operas or musicals, works written or composed by our own students, or even standard repertoire. Productions could be minimal, with the focus being on direction and performances, or fully executed with lighting, sets, and costumes designed by the students. Whatever the format, the goal is to provide students with more opportunities in music theatre and opera. There are several components to this project. The first component is forming the student organization \u2014 the theatre company. While forming a student theatre company allows for more creativity and room to try different things, we must also figure out how to operate within the limits of a campus club. The second component is producing a show. To get a taste what our club would eventually be doing, the committee is essentially' producing a show with the guidance of Lyric Opera Theatre faculty. The third component is writing the actual thesis and preparing for my defense. Because this project is not a traditional research project, the end result will be more than a thesis paper. I hope to be able to show that Basement Collaborative has developed into an organization that will be able to sustain past my time here at ASU.

Robin the Fae: A Costuming Project

This document is a description of my research and process in building a fairy costume. As a theater major, specializing in costumes, I created a costume that incorporated different aspects of my education. 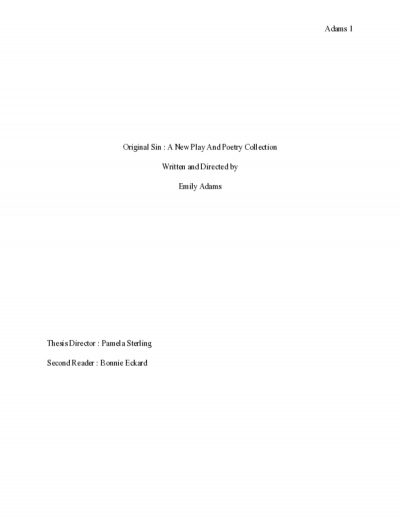 Original Sin is a new play and poetry collection that tells the stories of mythological women and femmes, including Eve, Niobe, Queen Isis, Hera, Athena, Demeter, Ganymede, and Persephone. The…

Original Sin is a new play and poetry collection that tells the stories of mythological women and femmes, including Eve, Niobe, Queen Isis, Hera, Athena, Demeter, Ganymede, and Persephone. The words are comprised of the monologues of living women interviewed specifically for the purposes of this project, fighting to "take their stories back" from the monolithic male voices which have held them fast. These words were converted into a free verse poetic series of monologues intended to be presented on the stage. At its core, Original Sin is about the relationship between hope and loss, and how empowerment is born from their collision. Original Sin was first written, directed and staged by Emily Adams at Binary Theatre Company in Tempe, Arizona. The first production opened at the Prism Space on February 23rd, 2018.

Six Years From Now is a verbatim theatre piece all about mental health. This creative project involved interviewing twelve different people about mental health and residential treatment centers, and then creating a play consisting of a series of monologues created from the exact words spoken in the interviews. The goal of writing this play was to help tell other people's stories, educate others about what living with mental illness is really like, educate others on modern residential treatment centers, and reduce the stigma around mental health and mental illness. 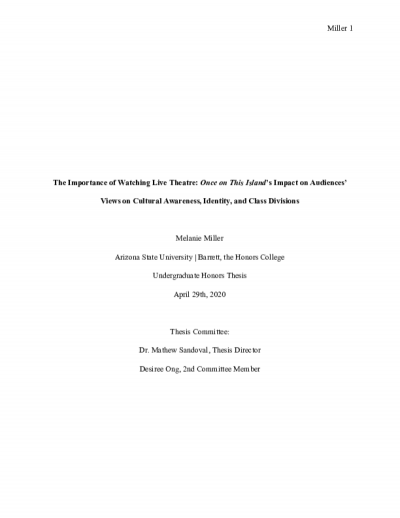 The Importance of Watching Live Theatre: Once on This Island’s Impact on Audiences’ Views on Cultural Awareness, Identity, and Class Divisions

My study explores how watching live theatre can impact students’ views on cultural awareness, identity, and class divisions. 22 students who had little to no previous participation with the arts…

My study explores how watching live theatre can impact students’ views on cultural awareness, identity, and class divisions. 22 students who had little to no previous participation with the arts were chosen to see the musical, Once on This Island , at ASU Gammage. Once on This Island offers a story of hope, love, and sacrifice that inspires audiences to fight for what they believe in. The students were asked to fill out a pre-show survey before seeing the show and participate in a discussion concluded by a post-show survey after they watched the show. The questions in the surveys and discussions revolved around the students’ feelings towards cultural awareness, identity, and class divisions. The responses revealed that students were introduced to a new culture and became more tolerant of engaging with other cultures as they were immersed in a new perspective. Also, students reexamined how they identified themselves and what the role of relationships played on their identity. Finally, the study found that through seeing the live production, the students became more accepting of all social classes because they were able to empathize with characters in a different social class than themselves.

A short film where female actresses are given the opportunity to play male Shakespeare roles breaking gender norms. 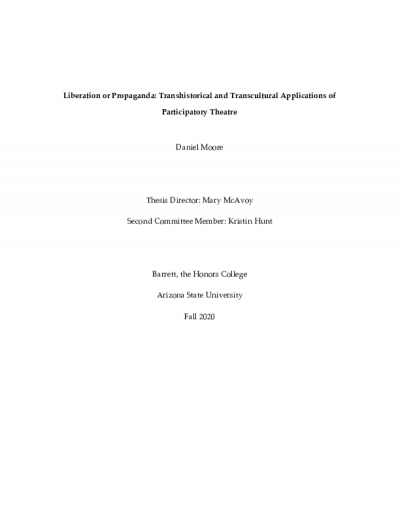 Liberation or Propaganda: Transhistorical and Transcultural Applications of Participatory Theatre

Theatre for social change, or more generally, theatre that addresses political issues in a community, often leans on participation as a way of democratizing the theatrical space and opening the… 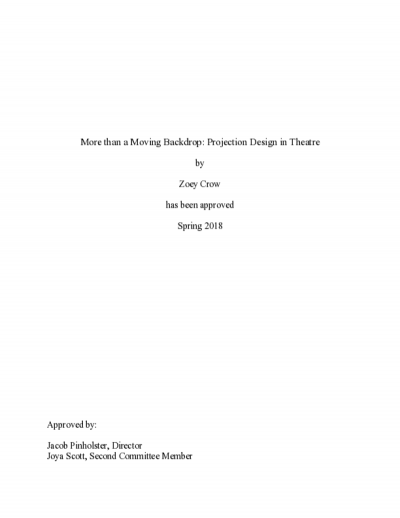 More than a Moving Backdrop: Projection Design in Theatre

More than a Moving Backdrop: Projection Design in Theatre is comprised of two parts, a research paper and a guidebook. This thesis is about using media/projection design, in conjunction with…

More than a Moving Backdrop: Projection Design in Theatre is comprised of two parts, a research paper and a guidebook. This thesis is about using media/projection design, in conjunction with other elements of design, to create the world of the story on stage and take the storytelling to the next level. The research paper starts with information about unique opportunities offered through media, including using media as a new way to tell old stories and a way to bring cinematic elements, such as rapidly switching locations, into the theatre. This information is followed by an examination of a few disadvantages of using media in theatre. Some of these include the expense of the technology required to use media, the steep learning curve with the necessary software and hardware, and the fact that media can very easily become a distraction for the audience. The paper then covers ways to use media design with a purpose beyond simply setting location with examples from recent Broadway productions. Some of these methods include using media as a way to bring the audience into the mind of the main character, such as in Dear Evan Hansen. Another way to use media is for accessibility, such as projecting supertitles, which can be seen in the recent revival of Spring Awakening through Deaf West Theatre. In this production, the supertitles are integrated into the design and fit the aesthetic of the rest of the production. The third example mentioned in this paper is using media as a backdrop to support the production's aesthetic, such as in Anastasia. This section is followed by an analysis of three personal experiences as a media designer. The research portion of the thesis concludes with thoughts about where media could go in the future, given media's basis in rapidly evolving technology. The second part of this thesis is a guidebook, created specifically for college age directors and media designers. The guidebook starts with a brief history of media design in theatre and uses of media outside of theatre. Next, the guidebook contains the same information and examples about using media with purpose from the research portion, translated from more academic language, to more easily digestible language. This is followed by a large section, specifically directed toward media designers, about collaboration with other designers. This section is filled with information and advice gathered from personal experience and surveys sent to fellow designers. The guidebook ends with an advice section from and to directors and media designers about working together and creating a common language to collaborate successfully. Hopefully the guide will help ease trepidations for working with media design. 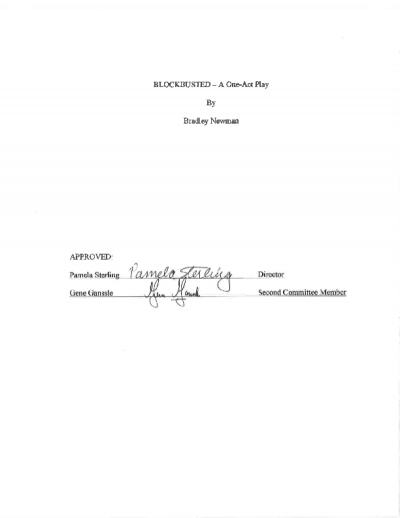 BLOCKBUSTED is a one-act play about Clyde, a 12-year-old boy who has a pretty wild imagination. After losing in a very competitive sand castle building competition, Clyde is determined to…

BLOCKBUSTED is a one-act play about Clyde, a 12-year-old boy who has a pretty wild imagination. After losing in a very competitive sand castle building competition, Clyde is determined to prove to his father that he is in fact not a failure. When Clyde's father becomes sick with a very uncommon disease, Clyde must find a way to get the money required for his father's surgery. A mysterious being offers Clyde the chance to get the money, but Clyde must go on a journey and bring back a secret treasure. Clyde ends up traveling to the last remaining Blockbuster Video store where he must complete various tasks in order to receive the treasure. Along the way, Clyde unexpectedly meets up with his former best friends who go with him on his journey. Their relationship is put to the test, as they must find a way to work together to help Clyde save his father while also learning that having personal quirks isn't always a bad thing.