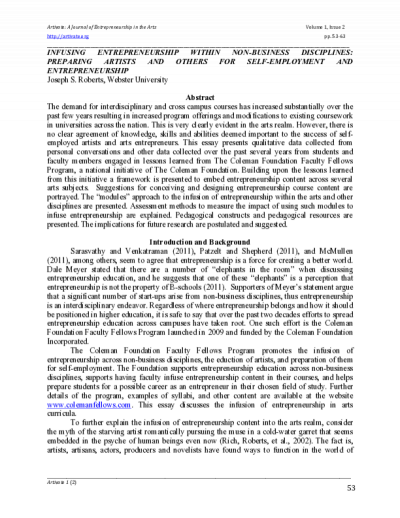 The demand for interdisciplinary and cross campus courses has increased substantially over the past few years resulting in increased program offerings and modifications to existing coursework in universities across the nation. This is very clearly evident in the arts realm. However, there is no clear agreement of knowledge, skills and abilities deemed important to the success of selfemployed artists and arts entrepreneurs. This essay presents qualitative data collected from personal conversations and other data collected over the past several years from students and faculty members engaged in lessons learned from The Coleman Foundation Faculty Fellows Program, a national initiative of The Coleman Foundation. Building upon the lessons learned from this initiative a framework is presented to embed entrepreneurship content across several arts subjects. Suggestions for conceiving and designing entrepreneurship course content are portrayed. The “modules” approach to the infusion of entrepreneurship within the arts and other disciplines are presented. Assessment methods to measure the impact of using such modules to infuse entrepreneurship are explained. Pedagogical constructs and pedagogical resources are presented. The implications for future research are postulated and suggested. 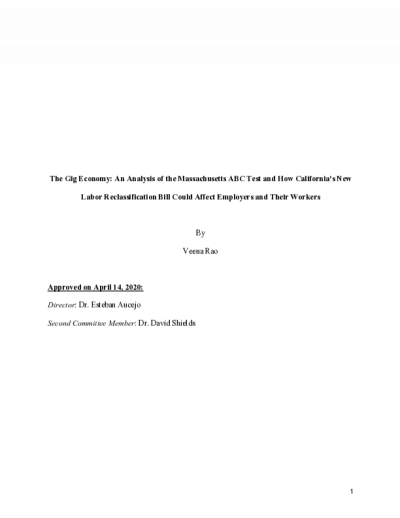 The Gig Economy: An Analysis of the Massachusetts ABC Test and How California's New Labor Reclassification Bill Could Affect Employers and Their Workers

The gig economy is a rapidly growing portion of the US labor landscape. It is appealing to many individuals, as it provides autonomy for workers and opens up increased opportunities…

The gig economy is a rapidly growing portion of the US labor landscape. It is appealing to many individuals, as it provides autonomy for workers and opens up increased opportunities for working jobs with desirable schedules. The new California legislation, Assembly Bill 5, is likely to disrupt this sector by increasing costs for employers and removing autonomy from independent contractors with the ABC test that challenges current legal classifications of independent contractors. The ABC test has previously been passed in Massachusetts in 2004 and this paper aims to determine how the test has impacted the Massachusetts self-employment sector. A difference-in-differences estimation and linear regression model were analyzed to accurately determine the impact. A minimal negative correlation was found between the introduction of the ABC test in Massachusetts and the proportion of self-employed individuals in Massachusetts post-treatment. It was also found that the percentage change of average wages for self-employed individuals sharply increased in the first year directly following the implementation of the ABC test in Massachusetts and then decreased in the next year. The regression showed little correlation between the ABC test and self-employment in Massachusetts, as the p-value was not significant at the 5% level for the difference-in-differences interaction term, possibly due to limitations of the model.