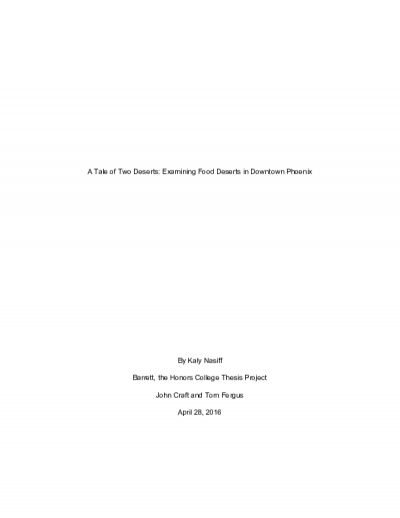 A Tale of Two Deserts: Examining Food Deserts in Downtown Phoenix is a 26 minute 46 second documentary by Kaly Nasiff. Link to documentary: https://youtu.be/4pRBIwHb2qM. The documentary starts by…

A Tale of Two Deserts: Examining Food Deserts in Downtown Phoenix is a 26 minute 46 second documentary by Kaly Nasiff. Link to documentary: https://youtu.be/4pRBIwHb2qM. The documentary starts by explaining what a food desert is, as defined by the United States Department of Agriculture, and how the problem is compacted in downtown Phoenix. The USDA defines food deserts as, "parts of the country vapid of fresh fruit, vegetables and other healthful whole foods, usually found in impoverished areas. This is largely due to a lack of grocery stores, farmers' markets and healthy food providers." There are over 40 food deserts in the city of Phoenix and two of them are in the heart of downtown. The documentary goes on to explain how food deserts can negatively affect the health of residents, who are most likely getting food from convenience stores in order to supplement the lack of grocery stores. The project also addresses how the city of Phoenix currently works to help residents and what its plans are for the future. There are several community initiatives that are fighting food deserts. Discovery Triangle's Fresh Express Bus makes weekly stops in the community to sell fresh produce at a discounted rate out of a refurbished city bus. The open air market at Phoenix Public Market is a farmers market that was established in 2005 to connect consumers with farmers, ranchers and food producers. Members of Pilgrim Rest Baptist Church set up a mobile food pantry every fourth Saturday of the month for people to come and take an assortment of food, free of charge. Lastly, Roosevelt Growhouse is an urban farm that shows volunteers how to grow their own vegetables, along with supplying nonprofits and local restaurants with fresh produce. Downtown Phoenix won't be a food desert for much longer. RED Development is planning a multi-use project called Block 23, which will include a Fry's Food Store. The project doesn't open until 2019, so residents of downtown will have to continue utilizing the resources they have to keep themselves fed.