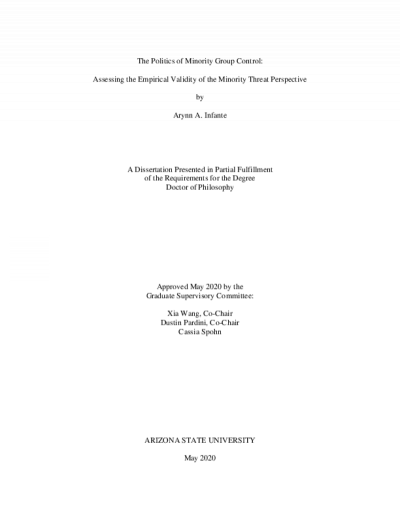 The Politics of Minority Group Control: Assessing the Empirical Validity of the Minority Threat Perspective

Blalock’s (1967) minority threat perspective is one of the most empirically investigated theories of crime control in criminological literature. A large body of research has tested this perspective and established a link between minority context and increased criminal justice controls.…

Blalock’s (1967) minority threat perspective is one of the most empirically investigated theories of crime control in criminological literature. A large body of research has tested this perspective and established a link between minority context and increased criminal justice controls. The perceived threat mechanisms hypothesized to facilitate this link, however, have received relatively scant attention. In addition, no multidimensional scale of perceived minority threat has been developed. These oversights have significantly impeded the advancement of research testing the empirical validity and generalizability of Blalock’s premises across racial and ethnic groups.

Against this backdrop, this dissertation extends prior work by conducting three separate but interrelated studies. The first study focuses on the development and validation of a multidimensional Perceived Latino Threat Scale (PLTS). The second study investigates how the PLTS can inform the relationship between Latino context and punitive border control sentiment. The third and final study assesses the psychometrics of another multidimensional scale of perceived threat—the Perceived Black Threat Scale (PBTS), and examines the structural invariance and distinctness of the PBTS and PLTS.

Using data collected from two college samples, I relied on a variety of different methods across the three empirical studies, including confirmatory factor analyses, bivariate and partial correlation analyses, and ordinary least squares regression. Overall, the findings suggest that both the PLTS and PBTS are multidimensional constructs that are structurally invariant and empirically distinct. In addition, perceived Latino threat significantly influenced punitive border control sentiment, but did not surface as a mediating mechanism linking ethnic context to immigration attitudes. Furthermore, whereas objective Latino population context did not demonstrate significant effects on either perceived Latino threat or punitive border control sentiment, the results emphasized perceived Latino context as a key moderator in the relationship between perceived Latino threat and punitive border control sentiment. Thus, the findings support the multidimensionality of perceived threat, as well as the hypothesized link between perceived threat and punitive controls, but raises key concerns about the generalizability of Blalock’s perspective to explain the threat-control process of Latinos. Implications for theory and research are discussed.